Introduction to The Outpost

Trapped in his tiny mountain cabin, she didn’t expect to fall for his big heart.

Exposing a prominent criminal family with an investigative news report didn’t exactly work out the way Sabrina had hoped. Instead of basking in the glory of her article’s success, she’s on the run from a powerful man who wants her dead. To stay safe, she’s forced to trade one bad situation for another. Stuck in the Montana wilderness, she’s secluded from anything resembling civilization or the modern-day world. The only good thing about her situation is the gorgeous mountain man assigned to protect her. Too bad he isn’t the slightest bit interested in a city girl like her.

Beau likes his life quiet and simple. Give him a peaceful day hiking in the woods with his dog, and he’s a happy man. He has no use for large crowds, noisy cities or dramatic women. So when a hotshot reporter rolls into town, dragging her big-time problems with her, he should have run for the hills. Instead, he volunteered to keep her safe. Bringing her into his world won’t be easy, but if he can convince her that Montana isn’t as terrifying as she believes, they might just be the perfect match.

The Firefighter and The Investigative Journalist

So, back to The Outpost, this is the story of Sabrina and Beau. Sabrina is an investigative journalist who exposed a prominent criminal family (the Federovs) by posing as a girlfriend to one of the sons so she could get access to evidence that will pin down the family’s criminal acts. After successfully submitting her story to her boss and the evidence to the FBI, her Federov boyfriend learned about her undercover investigation and tried to kill and rape her.

Luckily, she was able to escape the attempt and fled to her best friend’s town in Prescott, Montana. There, she met Beau, a search and rescue team leader/firefighter, who volunteered to hide her in one of the firefighter’s outposts in the midst of Montana mountains.

Attraction sparks between the two of them but they have a problem. They think that they are both from different worlds and cannot work a relationship without one sacrificing the life they used to live.

Overall Rating and Final Thoughts about The Outpost by Devney Perry

I do not want to give out so much details on this review about how the story progresses to avoid spoilers but all I can say is that the romance is swoon worthy to the point that you will say that no such relationship ends perfectly. But, romance readers like I do crave for such an ending which makes this story really great. The thrill of this story comes with the consequences of Sabrina’s expose article which involves FBI agents and the Federovs.

The author has a great talent in making the story suspenseful and exciting with some surprises here and there that can make you finish the book in one reading. What is also great about this book is how the author creates a clear and inviting picture of the scenery in the Montana mountains as well as the small-town vibe of Prescott.

Though there are several swoon-worthy lines in this book, I would like to share this quote as my favorite and I believe is the most significant thought coming from this book. My rating for this book is 4.5. 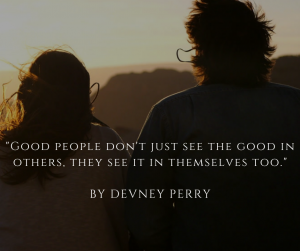 1 thought on “The Outpost by Devney Perry Book Review”