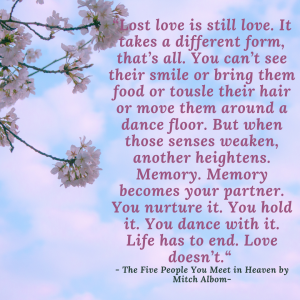 Goodreads Blurb of The Five People You Meet in Heaven

From the author of the phenomenal #1 New York Times bestseller Tuesdays with Morrie, a novel that explores the unexpected connections of our lives, and the idea that heaven is more than a place; it’s an answer.

Eddie is a wounded war veteran, an old man who has lived, in his mind, an uninspired life. His job is fixing rides at a seaside amusement park. On his 83rd birthday, a tragic accident kills him as he tries to save a little girl from a falling cart. He awakes in the afterlife, where he learns that heaven is not a destination. It’s a place where your life is explained to you by five people, some of whom you knew, others who may have been strangers. One by one, from childhood to soldier to old age, Eddie’s five people revisit their connections to him on earth, illuminating the mysteries of his “meaningless” life, and revealing the haunting secret behind the eternal question: “Why was I here?”

The Five People You Meet in Heaven Audio Reading on YouTube

Lessons from the Five People You Meet in Heaven

Here are quotes from The Five People You Meet in Heaven by Mitch Albom as told to Eddie by the people he met in heaven.

Lesson 1 from the Blue Man

The first person, Eddie met in heaven is the Blue Man – a man from a carnival.

“That there are no random acts. That we are all connected. That you can no more separate one life from another than you can separate a breeze from the wind.”

“No life is a waste. The only time we waste is the time we spend thinking we are alone.”

“People often belittle the place where they were born. But heaven can be found in the most unlikely corners.”

“Fairness does not govern life and death. If it did, no good person would ever die young.”

“It is because the human spirit knows, deep down, that all lives intersect. That death doesn’t just take someone, it misses someone else, and in the small distance between being taken and being missed, lives are changed.”

“People think of heaven as a paradise garden, a place where they can float on clouds and laze in rivers and mountains. But scenery without solace is meaningless.”

“This the greatest gift God can give you: to understand what happened in your life. To have it explained. It is the peace you have been searching for.”

The second person Eddie met in heaven is the Captain, his superior during the war when he was a soldier.

“Time, is not what you think…Dying? Not the end of everything. We think it is. But what happens on earth is only the beginning.

“Sacrifice is a part of life. It’s supposed to be. It’s not something to regret. It’s something to aspire to. Little sacrifices. Big sacrifices. A mother works so her son can go to school. A daughter moves home to take care of her sick father. A man goes to war.”

“Sometimes when you sacrifice something precious, you’re not really losing it. You’re just passing it on to someone else.”

Lesson 3 from a stranger named, Ruby

The third person Eddie met in heaven is a stranger, a waiter at a diner that Eddie knows. Her name is Ruby just like the place where Eddie had lived, Ruby Pier.

“Better, to be loyal to one another.”

“Holding anger is a poison. It eats you from inside. We think that hating is a weapon that attacks the person who harmed us. But hatred is a curved blade. And the harm we do, we do to ourselves.”

“All parents damage their children. It cannot be helped. Youth, like pristine glass, absorbs the prints of its handlers. Some parents smudge, others crack, a few shatter childhoods completely into jagged little pieces, beyond repair.”

“Parents rarely let go of their children, so children let go of them. They move on. They move away. The moments that used to define them – a mother’s approval, a father’s nod – are covered by moments of their own accomplishments. It is not until much later, as the skin sags and the heart weakens, that children understand; their stories, and all their accomplishments, sit atop the stories of their mothers and fathers, stones upon stones, beneath the waters of their lives.”

The fourth person Eddie met in heaven is Marguerite, his wife who died before him at 47 years old.

“Lost love is still love. It takes a different form, that’s all. You can’t see their smile or bring them food or tousle their hair or move them around a dance floor. But when those senses weaken, another heightens. Memory. Memory becomes your partner. You nurture it. You hold it. You dance with it. Life has to end. Love doesn’t.“

The fifth person or the last person Eddie met in heaven is Tala – the girl from the Philippines where Eddie was deployed as a soldier in a war.

This is not directly stated in the book but when Eddie questions his meaningless existence, Tala made him realized the importance of his job in making children safe in the amusement park at the Ruby Pier.

Final Thoughts on The Five People You Meet in Heaven

There go all the lessons that Eddie learned from the people he met in heaven. The first time I read this book, I even took notes of these lessons in my diary. If you have a passing curiosity about this book, then these are the lessons and quotes that made a mark on me. There are stories attached to each of these quotes all relating to the life of Eddie. This is the second book I’ve read written by Mitch Albom, the first one being Tuesdays with Morrie. If you are in some ways connected to the quotes and the lessons above or if you are into inspirational or spiritual read, then The Five People You Meet in Heaven is highly recommended.

Book Title: The Five People You Meet in Heaven