This is a review of Beach Read by Emily Henry. I read this book days after its release but I only get to write my review of it after 7 months. This is a chick-lit, adult romance and in a way second-chance, enemies-to-lovers, and slow-burn romance. There are a lot of things I love about this book to summarize here but definitely, it is a well-written story with plot twists that offer something different that can touch your heart in different ways.

A romance writer who no longer believes in love and a literary writer stuck in a rut engage in a summer-long challenge that may just upend everything they believe about happily ever afters.

Augustus Everett is an acclaimed author of literary fiction. January Andrews writes bestselling romance. When she pens a happily ever after, he kills off his entire cast.

In fact, the only thing they have in common is that for the next three months, they’re living in neighboring beach houses, broke, and bogged down with writer’s block.

Until, one hazy evening, one thing leads to another and they strike a deal designed to force them out of their creative ruts: Augustus will spend the summer writing something happy, and January will pen the next Great American Novel. She’ll take him on field trips worthy of any rom-com montage, and he’ll take her to interview surviving members of a backwoods death cult (obviously). Everyone will finish a book and no one will fall in love. Really.

Beach Read tells the story of January and Gus and is mainly told from the perspective of January. They are college rivals with a little romance history or should I say 1 night at the frat house dance party intimate encounter. They met again in North Bear Shores, Michigan, and were next-door neighbors. This time, January was broke, heartbroken, disappointed about life in general, and was struggling to write a book with happily ever after.

Enter Gus who is an author of literary fiction, January’s ex-college nemesis, and is not a believer of happily ever after.
The past attraction was roused between the two and one night, they entered into a deal where Gus will write about romance and January will write a “bleak literary fiction.” They agreed to teach each other where to get inspiration in writing each of their stories and no one will fall in love.

And, you know what happens when two people entered into such kind of deal, they tend to break it. That happened to Gus and January, they fell in love despite the complications brought about by the other dramas in their lives. In the case of Gus, there’s an issue with his ex while for January, it was mainly from her disappointment on her late father cheating on her mother.

In this story, Gus and January redefined what is happily ever after.

I am an aspiring writer who has never taken a bold step in starting my own story but every time I come across books or even movies where writers’ struggles were given special attention, it always interests me. So, I decided to read Beach Read by Emily Henry. I like that in the process where Gus and January were talking about their writers’ struggles, and when they were teaching each other how to create their stories, I too learned something. In a way, it was a bit discouraging to know that writing requires such immersion and research. Nevertheless, I hope to start writing my own story soon.

I cannot really say I like the building of romance between Gus and January. It is just okay I guess because it is realistic. But, it is not something that really swooned my romance reader’s heart.

I like the back story of January and her relationship with her father as well as the letters that were left to her. The way his father’s story paralleled her own story, makes January’s hesitations and fears about love believable. I want to leave similar letters to my children as well in the future but surely I would want to write better letters for them than what January received lol.

Gus and January redefining the happy ending is great in my opinion. I love how the concept of happy for now is incorporated into the story. In some ways, it convinced me that it could be better than the happy ending that I know of or have expected from this story. January and Gus making their book dedication also impressed me and brought a smile to my face.

Here’s a quote from Beach Read on falling in love. 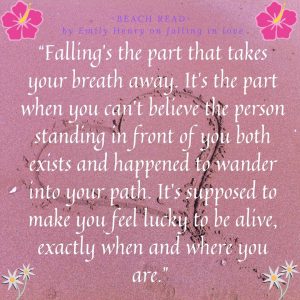 What is lacking with Beach Read?

Beach Read is a heart-warming story and it is well-written but there are some parts where I find the dialogues too cheesy. Even the letters from his father are not really heart-wrenching. I would love to cry reading those letters as I also miss my father but I just couldn’t.

Beach Ready by Emily Henry is a well-written book that can connect to readers in different ways. It is filled with backstories and twists that make this book stand out from other romance books released this year. Readers will love this book in different ways and I already said my reasons above. With those things in mind, my rating of this book is 4.6-star.