We met at a wedding—him sitting on the groom’s side, me sitting on the bride’s. Stealing glances at each other throughout the night, there was no denying an intense, mutual attraction.

I caught the bouquet; he caught the garter. Hunter held me tightly while we danced and suggested we explore the chemistry sparking between us. His blunt, dirty mouth should’ve turned me off. But for some crazy reason, it had the opposite effect on me.

We ended up back in my hotel room. The next morning, I headed home to New York leaving him behind in California with the wrong number.

I thought about him often, but after my last relationship, I’d sworn off of charming, cocky, gorgeous-as-sin men. A year later, Hunter and I met again at the birth of our friends’ baby. Our attraction hadn’t dulled one bit. After a whirlwind trip, he demanded a real phone number this time. So I left him with my mother’s—she could scare away any man with her talks of babies and marriage—and flew back home.

I’d thought it was funny, until the following week when he rang the bell at Mom’s house for Sunday night dinner. The crazy, gorgeous man had won over my mother and taken an eight-week assignment in my city. He proposed we spend that time screwing each other out of our systems.

Eight weeks of mind-blowing sex with no strings attached? What did I have to lose?

Nothing, I thought.
It’s just sex, not love.
But you know what they say about the best laid plans…

Sex Not Love by Vi Keeland tells the story of Hunter Delucia and Natalia and is written from their dual perspective. They first met at the wedding of Anna (Natalia’s best friend) and Derek (Hunter’s best friend). Attraction immediately sparked between them and Hunter had been very vocal and frank with Natalia in telling her that he wanted to explore the physical chemistry between them. Although Natalia was attracted to Hunter, she kept on avoiding him by giving him her wrong number. Natalia had learned from her past relationship not to trust and be swooned by charming, cocky and gorgeous men so she tried her best to keep on avoiding Hunter.

But, they met again at the birth of Anna and Derek’s baby where Natalia accidentally gave Hunter her mother’s number when he again asked for it. Natalia was surprised to see Hunter showing up on her mother’s Sunday dinner when he took a work assignment in New York City where Natalia lives. Hunter has won her family’s approval as well as that of her stepdaughter who she currently has temporary custody of because her ex-husband was imprisoned.

Natalia finally agreed to have a relationship with Hunter where they agreed for just a sexual relationship with no strings attached. But, they were not able to fool themselves and finally fell in love with each other. However, Hunter has a secret on why he does not want to consider a long-term relationship with Natalia. His mother died young because of Huntington’s disease and such genetic disease was passed on to his brother who ended his own life eventually because such disease left him useless.

Eventually, Hunter decided to subject himself to a test and he was tested negative for Huntington’s disease and finally, he lives happily ever after with Natalia.

This story is typical of Vi Keeland’s works with both sexy characters falling in love and have to overcome some hurdles along the way that usually come from their complicated secrets or problems with past relationships. What is great about Vi Keeland’s works just like this one is that her writing style will actually engage you in her story and will allow you to feel the emotions that are felt by her characters. It’s steamy and with some dirty talks from characters.

If you are a romance novel reader, you will find this book addicting and swoon-worthy and you can actually finish it fast in one reading. Vi Keeland definitely did not let me down on my expectations of her writing style on this one. I give this book my 4.5-star rating and the quote below from the book simply just hit home. 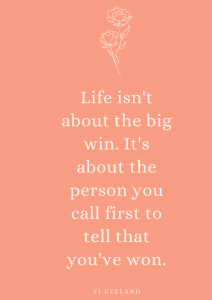