Letters from Father Christmas by J.R.R. Tolkien originally published as The Father Christmas Letters is a compilation of the author’s Christmas letters to his children. It recounts the story of Father Christmas and his friends all the way from the North Pole. It contains stories of mischiefs and wars that ensued in Father’s Christmas house with loveable characters that will surely touch your heart.

Can you imagine writing to Father Christmas and actually getting a reply? For more than twenty years, the children of J.R.R. Tolkien received letters from the North Pole – from Father Christmas himself! They told wonderful stories of mischief and disaster, adventures, and battles: how the reindeer got loose and scattered presents all over the place, how the accident-prone Polar Bear climbed the North Pole and fell through the roof of Father Christmas’s house, and many others.

This book consists of letters from Father Christmas to the children of J.R.R. Tolkien. The letters arrived yearly on Christmas Day from the years 1920 to 1943 excluding 1921 and 1922. The letters started with short notes from Father Christmas and in 1925, accounts on the funny stories bordering to mischiefs of Polar Bear were on the letters. Sometimes, letters that were written by Polar Bear calling himself the GREAT (Polar) Bear arrived as well.

Father Christmas had to blow the great Horn, Windbeam to call for help that was also responded by the snowboys, polar bears, and hundreds and hundreds of elves.  They won the war as a result.

Right after the Goblin invasion of 1933, Father Christmas gave the elves some new magic sparkler spears to scare the goblins away but they still returned in 1941.

One of Polar Bears funny mischiefs was when he flooded the gift room while taking a bath because he slept in doing so.

In one of the letters, there is a pantomime and a long rhyme written by Father Christmas, Ilbereth, Paksu and Valkotukka. There’s also a mention of The Hobbit and of war and how it was reducing the gift stocks and making it difficult for Father Christmas to distribute the gifts. 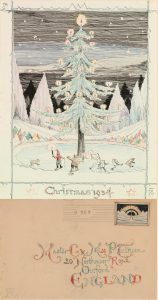 The letters sometimes include drawings of Father Christmas’s house and sleigh, a very tall Christmas tree from Norway with lights, party of snowboys and polar cubs, Father Christmas while packing gifts, Polar Bear fighting the Goblins, and even Goblin alphabet. 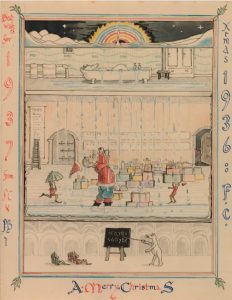 What do I like about Letters from Father Christmas?

I like the consistency of Tolkien in sending letters to his children every Christmas for 21 years. The letters are engaging and pleasant. They surely bring a smile to my face several times. I love how proud Polar Bear is and how he makes comments on the letters to deny his mischiefs. There are even big events such as the invasion of Goblins that were recounted in the letters. If I were to receive those letters, I would surely be immersed and would look forward to them every year.

Also, Father Christmas incorporated real events in the letters especially the misfortunes caused by the war that occurred when the letter was written. Mentions of these real events made the letters in a way more relevant.

What is the least interesting about Letters from Father Christmas?

I must say, they are the short letters when Father Christmas was rushing and had limited time to write.

Overall Rating and Final Thoughts on Letters from Father Christmas by J.R.R. Tolkien

As a Tolkien fan who read The Hobbit and The Lord of the Rings Trilogy, I am thrilled to have come across this book. In these letters, I was again amazed by Tolkien’s imagination in creating stories about Father Christmas and his friends at the North Pole. Only Tolkien can turn simple letters into a whole book that is engaging and enjoyable in that matter when compiled. In these simple letters, I found the Goblin invasion in a way similar to the events in Tolkien’s other book, The Hobbit, particularly the part about the battle of the five armies.

To have lived during the time of World War II, it is not surprising that Tolkien’s works depict wars among different races, and even in these simple letters to his children, he made a mention of the wars and how it is impacting Father Christmas gift distributing activities.

Letters from Father Christmas is an enjoyable read. The letters may have been intended for his children but they are socially relevant. As always, Tolkien never ceased to amaze readers in putting big events to his writing just like the Goblin war and creating characters that will surely leave a mark on his readers’ heart just like the characters of Polar Bear and his nephews, Ilbereth and Father Christmas himself. As expected of me, this book gets my 5-star rating.